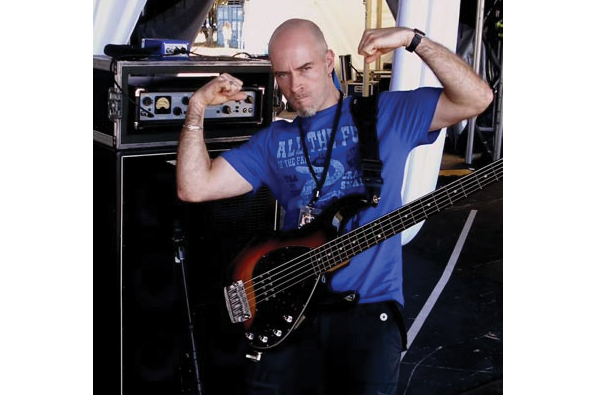 Nicky Twister Owen
Twister has been the bassist for one of the UK’s premier party bands ‘The Sway Allstars Orchestra’ for the last 15 years.

With Sway, Nick has travelled the world. Working for repeat clients such as Virgin Atlantic (Sway are Virgin’s House Band), Samuel L Jackson, EasyJet and IBM and has also had the honour to back a host of guest singers including: Smokey Robinson, Deniece Williams, Nicole Scherzinger, Kym Mazelle, Lemar, Alexandra Burke, Ellie Goulding, Connor Maynard, Richard Roundtree and Mr Hudson.

During this time he has also moonlighted for an impressive list of artists, including stints with Ronan Keating (with whom he’s appeared across the UK and Europe, playing in venues such as the Royal Albert Hall and on TV shows such as Parkinson, Strictly Come Dancing, ToTP, CD:UK, GMTV and This Morning). Bonnie Tyler (including tours of Europe, Scandinavia, Russia, Australia and New Zealand). Dirty Vegas (recording on their ‘One’ album as well as gigs in venues such as Abbey Road, BBC Maida Vale and live radio sessions for Radio 1’s Pete Tong and Radio 2’s Dermot O’Leary shows) and Gary Barlow.
Nick has also graced the stage in London’s West End, appearing in the smash hit musical We Will Rock You.

Nick proudly uses...
Like what you see?
View all artists