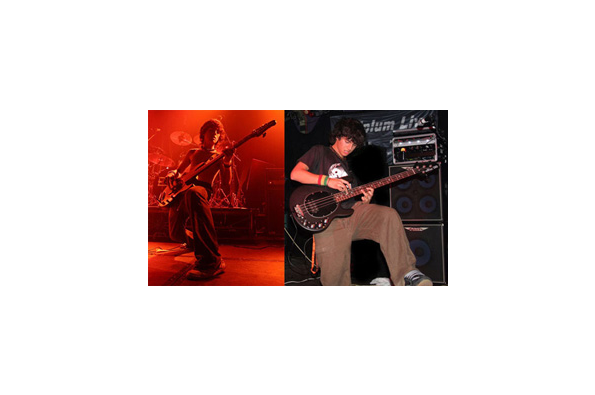 Josh Gurner
Sacred Mother Tongue was a four-piece British heavy metal band from Northampton initially formed in 2004. The line up consisted of Darrin South (vocals), Andy James (guitar), Josh Gurner (bass guitar) and Lee Newell (drums). The band has performed at music festivals throughout the UK including Download Festival 2009 and 2011, and Sonisphere Festival in 2010. Metal Hammer magazine described them as "the most convincing young British metal band to emerge in a long time".

The band released a 4-track EP, A Light Shines..., on 3 September 2012 and the Out of The Darkness album on 15 April 2013 through EMi Label Services and Transcend Records. In May 2013, Gurner announced that he was leaving the band to pursue his career with Hacktivist.

Hacktivist are a British rap metal band from Milton Keynes, Buckinghamshire, England, formed in 2011 by guitarist/vocalist/producer Timfy James and rapper Jermaine Hurley after Timfy's departure from his previous band Heart of Coward. In 2012 after the popular demand of their early demos a full Line-up was recruited and Josh joined in on Bass.

After the release of the Hacktivist EP, the band set out touring to promote it. This included supporting slots for acts such as Enter Shikari and Korn and performances in European festivals such as Sonisphere Festival, Download Festival and Rock Am Ring and Rock im Park in summer 2013.

Josh proudly uses...
Like what you see?
View all artists