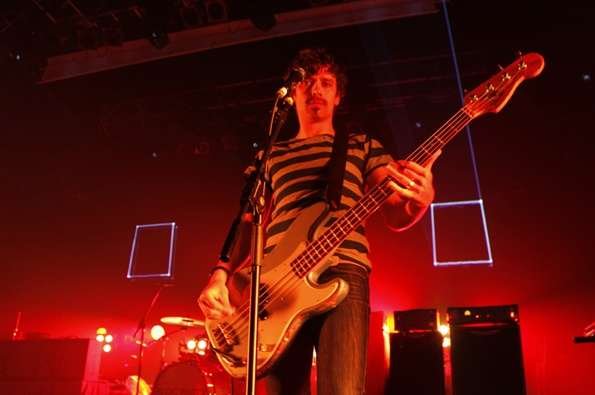 Gordon Moakes
Born 22.06.76, Gordon Moakes grew up in the suburbia known as Milton Keynes. The Moakes' were not a particularly musical family, but the young Gordy was first drawn to the art in the guise of his school's band. Unfortunately, he was rejected from playing the trumpet because he still had his first set of teeth! This dream was soon buried, and Gordon continued with his studies unfazed. However, the bug bit again during his teenage years in the form of an iconic voice on the radio: John Peel. Gordy's older brother owned a bass guitar, so Gordy took advantage of this to teach himself some music. Though left-handed, he chose to learn in the standard right-handed style of playing.

By university, Gordy was composing his own songs. He attempted to assemble a band without much success, and so he pursued his degree in creative arts at Bath Spa University. His aim was to become a music journalist, and he dabbled in writing for 'zines, namely 'Conform or Die'. He also designed websites. He also worked for a company that designed bulletproof BMW'S. Oddly enough, all three skills would serve him well after he discovered an advert placed in the NME by Kele Okereke and Russell Lissack. Boredom and intrigue drove Gordon to look into the proposition even though he was living quite far away at the time.

He made the trip from Reading to Chingford to meet Kele and Russell, two young men with guitars. Taken aback by their quietness, Gordy was nonetheless impressed by their talent and cohesion. It was as if the two did not need words to communicate. Slightly intimidated, Gordon played his best for them. Russell demonstrated a bassline he had written for a new song called 'Life of the Party'. The part was surprisingly complex but Gordy played the bassline perfectly back to him. Though Kele and Russell had tried out many bass players, Gordy was the first to be able to come close to replicating the part. Although he lived a fair distance away, Gordon was selected to be in the band.

For quite some time, Gordon maintained the Bloc Party website and shared his social discourse. Today, he is considered the unofficial spokesman for the band and is the band member most frequently interviewed by the press. However, despite his media presence, Gordy is regarded by many as a mysterious, intellectual, serious individual. One thing is certain though - beneath that mop of curls lies a man passionate about his art and his world.
Gordon proudly uses...
Like what you see?
View all artists