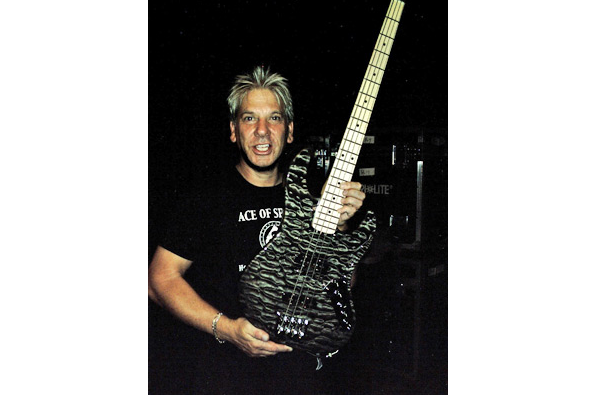 Ed Poole
Ed started his musical career at a very early age with his first adventures into the world of music via the viola and clarinet. He soon realised though that his future lay in the world of rock music. He started to play the bass at the age of 14 and very soon developed his own unique style. Influenced in the main by the likes of Larry Graham and Andy Fraser he spent the early Eighties in his own group, Stikki Stuff, a successful funk rock group. They released a single on Carrere Records and performed a myriad of gigs nation-wide culminating in several support tours with Level 42.

Ed has worked with many different artists throughout his career including Sam Brown, playing on her world-wide hit album and single Stop, Let Loose, Romeos Daughter, Deana Carter and Bonnie Tyler as her musical director. He was also the composer of the original music soundtrack for the film Cloud Cuckoo Land starring Sir Derek Jacobi, an Airborne Productions project, amongst other TV/documentary works. He has completed five solo albums to date and is currently working on his sixth.
Like what you see?
View all artists