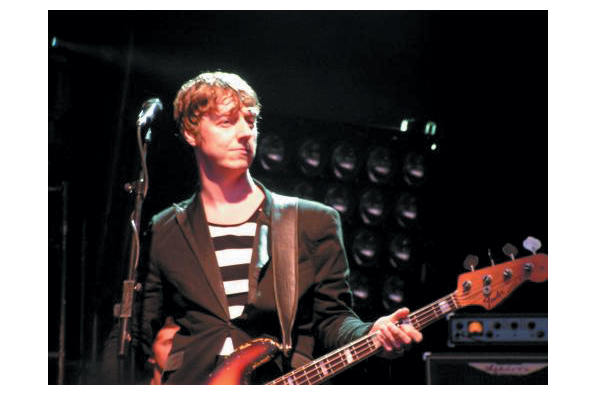 Dougie Payne
Douglas "Dougie" Payne (born 14 November 1972, Glasgow, Scotland) is the bassist and backing vocalist of the Scottish band Travis.
Travis is a Scottish rock band formed in Glasgow in 1990, composed of Fran Healy (lead vocals, rhythm guitar), Dougie Payne (bass guitar, backing vocals), Andy Dunlop (Lead guitar, banjo, backing vocals) and Neil Primrose (drums, percussion). The band's name comes from the Harry dean Stanton character Travis Henderson from the film Paris, Texas. The band is widely claimed by the media as having paved the way for other bands such as Keane and Coldplay to go onto achieve worldwide success throughout the 2000s, particularly through the band's The Man Who (1999) album.

The band released their debut album, Good Feeling (1997) to moderate success where it debuted at number nine on the UK Albums Charts and went onto achieve a silver certification from the BPI in January 2000. The band went on to achieve greater international success with their second album, The Man Who (1999) which spent nine weeks at number one on the UK Album Charts, totaling one-hundred and thirty-four weeks in the UK Top 100 album charts.
Dougie proudly uses...
Like what you see?
View all artists