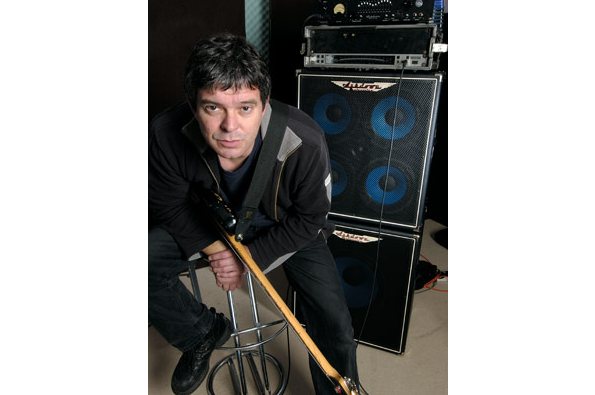 Jean-Jacques Burnel
Jean-Jacques Burnel was born in Notting Hill, London, to French parents. He moved with his parents to Godalming, Surrey when he was about twelve and attended the Royal Grammar School, Guildford and read history at the University of Bradford and Huddersfield Polytechnic.Burnel originally trained as a classical guitarist, but adopted the bass guitar as his instrument within The Stranglers. He has also sung lead vocals on about a quarter of their songs. Burnel has been with The Stranglers since their inception in 1974, but has also made two solo albums, Euroman Cometh in 1979, and Un Jour Parfait in 1988, as well as a collaborative album with fellow Stranglers member Dave Greenfield, Fire and Water (Ecoutez Vos Murs) in 1983. Burnel has also produced and appeared as a guest musician for a number of artists, such as Lizard and ARB from Japan, Polyphonic Size (from Belgium) and Taxi Girl's album, Seppuku, in 1981, as well as Laurent Sinclair's "Devant le Miroir" maxi single. Burnel also formed a Rhythm and blues covers band The Purple Helmets who played a number of concerts and released two albums in the late 1980s. Despite only having lived there for a short period, Burnel received his call-up papers for National service in France. He succeeded in avoiding this service by arguing that his absence would indirectly damage The Stranglers as a band, and therefore the careers of the other members. Burnel has composed and performed music for the anime, Gankutsuou: The Count of Monte Cristo, including both the opening and ending themes, "We Were Lovers", and "You Won't See Me Coming" respectively.